This past week I went to see Julie & Julia – which, if you’re interested, I thoroughly enjoyed.  Julie Powell moves into a new apartment with her husband in Long Island City, Queens at the beginning of the film.  It’s right above a pizzeria and she and her husband have the whole top floor to themselves – though it’s still a studio.  Their front door is on the ground floor, but as soon as one enters the door there is a flight of stairs leading up to the apartment.  They do a lovely job of decorating their apartment with a mix of modern, comfortable furniture and a sort of unfortunate dorm-like sense of style.  I like the mix’n’match where nothing really matches, but everything goes, like the different sets of drapes.  But, the baker’s rack as a room divider and clothing storage is a little too revealing for me.  The thing that really got my attention in their apartment was the dinging room table and chairs.  (What also got my attention was how movies are able to make apartments in New York City seem to be the most quaint  and cozy places you’ve ever been rather than the most minuscule and cramped.)  The dining room table is an old farm style pedestal table, like the one every member of my family from the mid-west has; it just seems so quintessentially homey to me.  The chairs around Julie Powell’s table are what really caught my eye.

They have a set of four Thonet bentwood dining side chairs.  This is interesting because we see Thonet chairs in Julia Child’s part of the story too.

Pictured above at Le Cordon Bleu are several Thonet Vienna Cafe No. 18 chairs.  The houses Julia and Paul Child lived in in Paris, Marseilles, Oslo and Cambridge were fantastic! I really enjoyed getting to move around with the Childs.  In Paris, we mostly spent time in the kitchen – oh, wait, we spent the whole movie in kitchens and dining rooms!  My favorite was the cool colors of the Norwegian kitchen; in that scene we follow the Childs from the kitchen into a sitting room.

The Childs' kitchen in Norway

The interior reminds me of a mid-20th century take on one of my favorite artist/illustrators, a Swede, Carl Larsson. 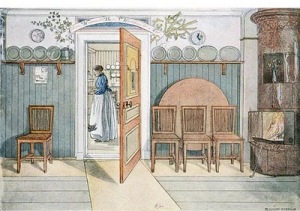 While he was from the early 20th century, his Scandinavian sensibility was obviously still influential on material culture 40 years later.  And it was in the 1950s when Scandinavian design became popular with its simple, clean lines of design.  This is around the time that Julia Child would have lived there.  So, we can see in her kitchen what appears to be a cane back chair by mid-century Danish designer Jens Risom.

Wow, I really didn’t expect this post to turn into such a Scandinavian love fest! But starting with Thonet’s invention of bentwood was bound to lead us straight to those indebted to him – the Scandinavian modern movement.  So, since we’re already on that path, I’ll finish up by noting that Julie Powell’s desk chair, in her apartment, also appears to be Scandinavian – maybe even Danish.  I rather like the symmetry of Julie’s interiors reflecting those of Julia.  It also shows how powerful and timeless great design can be!

Filed under In the Cinema

One response to “The Julie/Julia Project”