Brief notes on quick displays of design in a movie or TV show.

I was inspired by Flavorwire’s recent article titled, 15 Apartments on Film That We Wished We Owned, written by Colette McIntyre.  It covered some of my favorite apartments and homes in movies as well, and I could happily write a post for each one of them (and who knows, I may!), but the first one I thought I would tackle is “Patrick Bateman’s minimalist bachelor pad,” as Ms. McIntyre called it, in American Psycho from 2000.

A view of Patrick Bateman's living room from the other direction.

When it’s not covered in plastic sheeting …(yikes!) we get to see the furniture, from all over the world, that makes up his house.  To the left of his sliding glass doors, we see a chair from Charles Rennie Mackintosh’s Hill House, in Helensburgh, Scotland.

I love the contrast between the master bedroom of The Hill House, with its stenciled walls, and stylized floral motifs, and Patrick Bateman’s cold, plain, white living room.  It shows what an iconic piece the Hill House chair really is; it can stand alone as a piece of design.

The two black leather side chairs and matching ottomans were designed by Ludwig Mies van der Rohe in 1929 for the German Pavilion for the International Exposition in Barcelona, Spain.  The Barcelona chair’s original aesthetic matches much more closely the aethetic of Patrick Bateman, but they were still seen in a much warmer environment, with golden marble and rich woods.

The Barcelona chairs and ottomans in situ, 1929.

The third piece of famous design in Bateman’s living room is the coffee table.  It was designed by Italian designer, Paolo Piva, c. 1980 for B&B Italia, and is called the Alana coffee table.  From what I’ve been able to find, Piva seems to give his pieces human names.  He was born in 1950, and his designs were most popular in the 1980s.  The time in which he was designing is especially interesting in relation to American Psycho, because while the movie was made in 2000, it was set in the 1980s.

Bateman’s furniture tastes cover many countries and many time periods, but it is the Alana coffee table that would have been brand new when he purchased it.

Gideon Ponte was the production designer for American Psycho and Jeanne Develle, the set decorator.  The American 1980s is not my area of expertise in decorative arts, and I wonder if the Hill House chair and Barcelona chairs would have been readily available for purchase at the time, and also if they would have been seen as the status symbols that they are now, and as I’m sure Patrick Bateman meant for them to be. 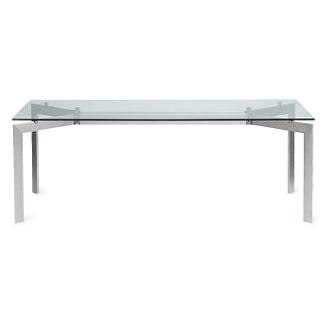 Sleepless in Seattle & the vague term of Egg Chair

I remember watching Sleepless in Seattle when it came out in 1993 and thinking Jonah had the coolest chair I’d ever seen – and that was it.

The chair in Jonah's bedroom in the movie

But now, watching it again as an adult and as a follower of design, I had to find out more about it.

I started by researching “egg chairs” and soon discovered that term opened up a whole can of worms, or, rather, a whole timeline of chairs!  His chair is the most recent in a long design lineage of chairs.  Jonah’s chair, originally known as the Alpha Stereo Chair, was designed by Lee West (dates unknown) and was made for Krypton Furniture.  It is now called the ModPod Egg Chair and they can now be purchased from a company called inmod.

But the story behind this “egg chair,” I think, begins in 1957, with Arne Jacobsen’s design of the first named Egg Chair.

Arne Jacobsen's Egg Chair, 1957 (This picture is of Design Within Reach's reproduction.)

Jonah’s egg chair has arm rests that are reminiscent of an Eames design.

The Eames' Molded Plastic Armchair, 1948 (This picture is of DWR's modern reproduction.)

Also from 1948, and also featuring a similar arm rest design is the Womb chair, designed by Eero Saarinen.

The final design component I noticed on Jonah’s chair was the base.  This great swivelling base that makes the whole scene in the movie as he and Jessica spin the chair around using only the tips of their toes that touch the ground.  This base must have been inspired by Eero Saarinen as well, in his Tulip Armchair from 1956.

And finally, there is another egg chair …not like Jonah’s and not like the original by Jacobsen, but one from 1968 designed by Henrik Thor-Larsen.  It was first shown at a Scandinavian furniture fair in 1968 and became a quick classic – and let’s face it, shape-wise, it is the most deserving of the name, Egg Chair.

The Ovalia Egg Chair, 1968 (These are modern reproductions.)

The egg chair, not to be confused with the ball or globe chair, by Eero Aarnio from the early 1960s, is a term that encompasses more chair history than I would have ever thought of in 1993 when I just wanted Jonah’s cool chair.

I went to see Pedro Almodóvar’s latest movie in the cinema, Broken Embraces (Los Abrazos Rotas), this past weekend.  Besides being amazed by his ability to tell a story and Penelope Cruz’s beauty, it delights me to report I spotted two chairs by Charles Rennie Mackintosh!

The Hill House Chair, as seen in the master bedroom, Helensburgh, Scotland

The chair, as seen in the image above,was designed to go in the master bedroom of The Hill House, built for Walter Blackie and his family in 1903.  Charles Rennie Mackintosh designed the chair and the house.  Walter Blackie was a book publisher in Glasgow, Scotland.  Many of the books he published were fairy tales.  So, The Hill House, very fittingly, has a subtle theme of roses and Sleeping Beauty.  The lattice-shape of the back of the chair fits both in dimension and theme the stencils on the walls of roses growing on trellises.

Ernesto Martel and Lena in their dining room

The Hill House Chair, as seen in the movie with red seat

I was unable to find a still from the movie that included the Hill House Chair.  It was the customary black, however, it had a red upholstered seat.  There are two in Ernesto Martel’s dining room and they are visible in the scene pictured above.

This is my first post in my new category of “Double Takes” where I plan to document quick views of famous design in movies and not get into the history, philosophy or interpretation of it all.

Although I do have to say, besides having a chair meant for a bedroom in a dining room, there is an interesting layer here with the theme of this chair.  As this chair was meant to evoke the feeling of a trellis where Sleeping Beauty’s roses might grow around her and cage her in with their thorns, so does Ernesto Martel to Lena in Broken Embraces.1

Filed under Double Takes, Foreign Film, In the Cinema