Tag Archives: Harry Potter and the Deathly Hallows Part I

In one week, The Academy Awards will be airing on ABC.  Over the course of the evening,  fashions will be discussed and awards for acting will be handed out, but my favorite part will be finding out who will win for Art Direction.  The following are the 2011 nominees for that Oscar.

Alice in Wonderland
My first thought is that this is an odd choice, as I would have thought most of the sets were added in digitally.  But, that poses an interesting question, because whether the set is real or digital, someone still has to decide how it looks.  If a Queen Anne chair or Regency bench is chosen from an antique store or recreated in a virtual world, the designer still has to recognize the necessity of it and know where to place it.

Harry Potter and the Deathly Hallows Part I
I’m not even sure I can choose one image to represent the Harry Potter series’ interiors.  I don’t know what I love more, Dumbledore’s office, the Griffindor Common Room, or the Weasley’s house, The Burrow.  What I do know is that there should be a religion named after Stuart Craig.  He has been nominated for his work in Harry Potter since the first movie.

...well, have you guessed my favorite? David Yates' (and J.K. Rowling's) The Burrow, as created by Stuart Craig, Production Designer and Stephenie McMillan, Set Decorator

Inception
If you happen to have read my post called, The Architects of Simplicity, then you’ll know who I want to win in this category.  Magnificent sets.  Both real and virtual.

The King’s Speech
This is a movie I will look at more closely in a forthcoming post.  The royal palaces had to be historically accurate and the background often blended out of focus as the attention was placed, rightly so, on Colin Firth as King George VI and Geoffrey Rush as Lionel Logue.  All this was done with impressive ease.

True Grit
I must confess, this is the final box to tick on my “Oscar movies to see list” and I’ll be seeing it this week!  But, while a lot of this movie appears to take place outside, if Joel and Ethan Coen’s past movies are any indication, their sets always have as much personality as their characters.  I will hopefully have more details to report soon, full of great Western Frontier interiors! 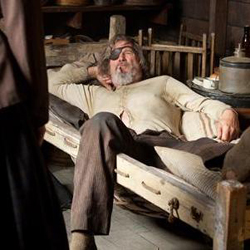 I’ll be watching (and tweeting the results!) next Sunday, February 27.